"RICH DAD POOR DAD" Book Summary,conclusion and my thoughts with pictures and examples

“Study hard get good grades, find a safe and stable job and you are settled for the rest of your life”

Studying hard is necessary for becoming rich but that doesn't mean that studying for your degree makes you rich. You can look around people around you who followed the advice to verify if it's true.

Did any person who followed the advice become rich?

Most people who followed the advice aren't rich.

Now, your mind may start to have questions such as these.

Then what should we do? How can we become rich?

These evergreen questions were answered frankly by the American businessman "Robert Kiyosaki" in his book called "Rich dad Poor dad". 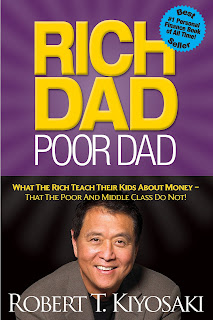 Now you may get some questions like what are you saying? Are you crazy? Study money? What is that? I have never heard of such a thing?

Many people think how to become rich but nobody thinks about how did the rich become rich?

The answer is simple and it is by studying money. Believe it or not

He calls people who study money as financially literate and according to him people with high financial IQ become rich.

So now we understand that we have to increase our financial IQ to become rich.

So here comes the next question in our mind. How to become financially literate and start increasing our financial IQ?

The five things to understand for becoming financially literate are:

2.Cash flow and its importance

3.Minding our own business

4.The History of Taxes and the Power of Corporations.

Knowing this difference between them is crucial for becoming rich because Rich people buy assets and poor people buy Liabilities that they think are assets’.

There is a common misconception among the poor and middle class and that is they think their house is their biggest asset not knowing that it’s actually their biggest liability.

You may ask Why?

If you think about it carefully when you buy a house it doesn’t make you money it just takes out money from your pocket.

You start to have more and more expenses after you buy the house like furniture, property tax, repairs, and the list goes on…. This increases your expenses without increasing your income which makes you poor or middle class.

What should you do then? Should you not buy a house?

The answer is no. You can buy your dream house but only after you understand cash flow.

2.Cash flow and its importance

A few years ago there were two friends and colleagues called Ramesh and Suresh. Both had the same income. Ramesh used to spend his salary and bonuses to buy costly cars, clothes and even bought a house while Suresh would invest the money on Realestate, Stocks, bonds, etc. Today Suresh is a millionaire while Ramesh Went Broke. 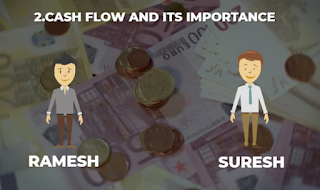 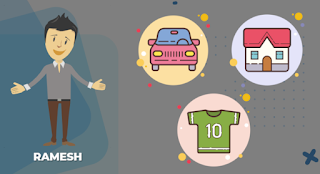 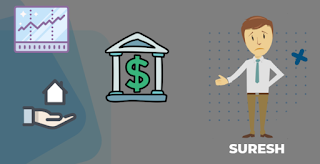 You may wonder Why? What made such a huge difference?

The answer was Suresh understood Cash flow while Ramesh didn’t. Cash flow when you break the word its cash and flow which simply tells you its definition that it’s the flow or movement of the cash. Understanding how your cash is flowing will solve many of your money problems.

From the story above if you observe carefully these were the cash flow diagrams of Ramesh and Suresh. 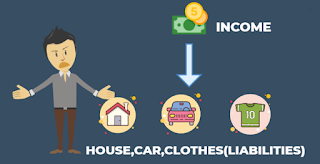 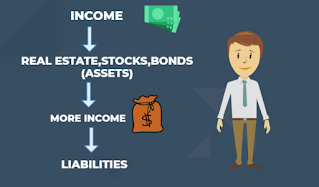 Did you understand the diagram?

Ramesh used to spend his income on Liabilities which kept on increasing as his needs increased while his income didn’t while Suresh started investing his money in stocks and Real estate which generated more income which paid for his Liabilities.

The story above is the prime example of how people become poor, middle class, or rich and the importance of knowing cash flow.

If you are intrested in creating more assets by doing real estate "Sell it like Serhant" is a great book for you.
Read my summary on it here - Read more

This answers your question about becoming financially free and also buying a house?

A person will become financially free when he creates enough assets to pay for his expenses or Liabilities so when we have assets that generate enough income for buying a house we buy one.

3.Minding Your own Bussiness

A few years ago the founder of the McDonald’s Ray Kroc visited a university for giving a speech to the university students on business where he asked everyone a question. He asked the students to guess what his business was? The students thought this as a silly question.

Everyone thought they knew the answer and that it was selling hamburgers. They were all gravely mistaken until he finally opened his mouth and told them that his business is Real estate and not selling Hamburgers. Selling Hamburgers was his profession.

This is another misconception among the poor and middle class. They confuse between profession and business. The profession is like your job but business is an asset which makes you money without you paying attention to them

Ray Kroc clearly knew the difference. His business was the land on which the McDonalds shops were built which were in pretty good Locations and streets and those lands price increase with time which inturn generates him income without any extra effort.

4.The History of Taxes and the Power of Corporations.

How many of you studied history in your school? How many of you hated it and thought it was quite boring? I too belong to the same gang. Even I dislike history. Don’t worry. The history I am going to talk about will be quite interesting and one such history you need to learn but isn’t thought at schools because the government hates you learning this important history of Taxes.

Taxes were initially only levied on the rich by the government. The poor and the middle class were quite happy for a short while until the government got the taste of money and their hunger for money increased due to enormous costs to support itself made them soon impose a tax on both the poor and middle class too.

The problem is Information flies at speed of light and the first ones to receive the info are the rich. So making friends with rich people gets us the information first which will soon help in creating our wealth. This is why people say networking is important. It is more important having connections with the rich this is where the money is made.

If some of you wonder why the book was titled “Rich Dad Poor Dad”.It was because Robert Kiyosaki had 2 dads. Don’t misunderstand...Not two biological fathers but one was his father who he calls the poor dad because he lived and died poor and the other is his friend’s father who he calls his Rich Dad who later became the richest person in Florida. All lessons he taught us in the book were lessons taught to him by his Rich Dad.

Robert gives great advice for people who are started learning money management and also about the importance of planning personal finance and how it can affect your wealth.

This was my first finance book. It was definitely an eye-opener to me and many people who neglect to manage their personal finance, and also the advice provided is a lot better than talking to a financial planner but the book only gives us broad answers without an in-depth analysis for the problems which I find a little disappointing. 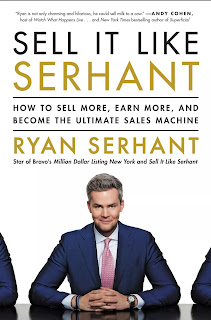 Sell it like serhant Book Summary ,conclusion and my thoughts with pictures and examples